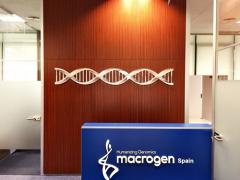 The Spanish branch of Macrogen was established last December following its first European branch in Amsterdam, Netherlands. This branch will provide quick and customer-friendly services to Southern Europe and the MENA (Middle East and North Africa) area to meet the rising demand. Macrogen is the world’s first genome sequencing company to establish an overseas branch in Spain and provide localization services.

The Spanish branch of Macrogen has been providing a trial service to existing customers in Southern Europe and the MENA area since February and will provide regular services in the second half of the year. Approximately 1,800 research institutions, as of the end of August, have utilized Macrogen’s services.

Macrogen’s CEO Hyon Yong Chong stated, “It is difficult for the existing branch in the Netherlands to support all customers in Europe because of the increasing demand from European customers,” He added “Customers of Northern Europe will be able to use the Netherlands branch, while customers of Southern Europe and the MENA area will be able to quickly and conveniently access Macrogen’s industry-leading genome sequencing services through the Spanish branch.”

Macrogen is continuously establishing a “global genome center network” in important overseas locations in a localization strategy to provide quicker and customer-friendly services. In addition to the recently opened branch in Spain, Macrogen has been stably operating the services in the USA (Rockville, Md., New York, Boston) since 2005, Japan (Tokyo, Kyoto) since 2007, the Netherlands (Amsterdam) since 2008, Oceania (Sydney, Australia) since 2013, and Singapore since 2016.

The Spanish branch of Macrogen is planning to host a customer appreciation event that includes special monthly gifts to their best customers from September to the end of the year to celebrate their official service launch in Southern Europe and the MENA area.